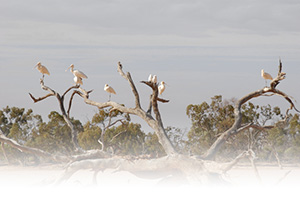 Currawinya National Park was gazetted in 1991 and 1991 is a wetland of international importance under the Ramsar Convention. This 151,300 hectare park features two large bodies of water - Lake Numalla, freshwater, and Lake Wyara, a salt lake.

These lakes are important breeding and refuge sites for a spectacular array of waterbirds, including waders migrating from across Australia and the world.

Currawinya's wetlands regularly support up to 100 000 waterbirds. Of particular importance are lakes Numalla and Wyara, no other wetland complex in arid or southern Australia is thought to consistently support such large populations of waterbirds.

Separated by only a few kilometres of sand dunes, each has different water conditions. Lake Numalla receives floodwaters more frequently from the Paroo River and is usually permanent. It holds freshwater, while the slightly larger Lake Wyara is saline and regularly dries to a vast, white claypan. Different bird communities live on each of the lakes at different times. Lake Wyara supports a greater number of waterbirds while Lake Numalla has a greater diversity.

The Greater Bilby has disappeared from nearly 90% of its former range in Queensland. An ambitious project to re-introduce the bilby to parts of its former range is being conducted within the Bulloo Shire at Currawinya National Park. Make an effort to visit Currawinya, marvel in its natural beauty and find out about the community bilby project.

Things to do in Currawinya