Location:
Noccundra – 142 kms west of Thargomindah along the Adventure Way 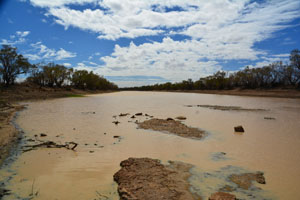 A large waterhole exists within the Wilson River adjacent to the Noccundra Hotel and is referred to as the Noccundra Waterhole. This waterhole is a popular campsite for locals and visitors alike.

Wilson River is a tributary of Cooper's Creek. The River passes through the land belonging to Nockatunga Station, which was originally settled by the Drynan brothers in 1868. There is a complex relationship between stock movement, the artificial provision of water, and the development of the transport routes and settlement patterns in Outback regions. Historical and modern routes through the arid pastoral districts of Australia were dependent on the availability of water. The extensive system of travelling stock routes in western Queensland was made feasible by the discovery of water. Consequently, the Wilson River played a very large part in the settlement of the area. During the time of early exploration and settlement, the Wilson River Aboriginal Tribe, known as the Nockaburrawarry, lived in the area.