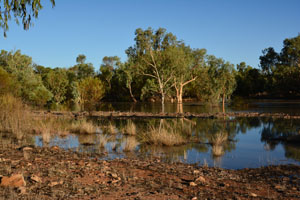 The Paroo has significant cultural and spiritual values to the traditional Indigenous owners of the Paroo River country, the Baakandji and Budjiti people. Paroo is a variation on the name of an Aboriginal Paakantji group, the Paruntyi (Australian Heritage Commission, 2000). The town of Hungerford developed from a cattle camp on the banks of the Paroo River in the 1860's. Today, the Paroo River is situated only a couple of hundred metres from Hungerford. Fishing is permitted in the river on either side of the Bridge crossing, where mainly golden Perch (Yellow Belly) and Catfish are caught, and Yabbies are plentiful during the winter months of May to August.

In the early years, the settlement and grazing of much of the country in the Paroo was initially limited to areas where surface water was available, while the back country of the region was not extensively settled until the presence of artesian bore water was discovered. Stock routes, and horse and coach routes predated the surveying of the roads. Horse coaches remained a mainstay of the transportation system on the Paroo until well into the twentieth century. Morrisey's Coaches operated up the Paroo from Wilcannia to at least as far as Hungerford in the 1870's.

Today, grazing, both beef cattle and sheep for wool production, is the predominantindustry in the catchment (DNR 2000). There are very few irrigated crops, with crop production generally restricted to small-scale operations aimed at providing supplementary feed for stock.

The Paroo River flows from its source in the Warrego Range and discharges onto a floodplain south of Wanaaring as it approaches the Darling River between Tilpa and Wilcannia (DNR 2000). The Paroo River is the last remaining free-flowing river in the northern Murray-Darling Basin. The Paroo Catchment has a semi-arid to arid climate and is an area of low rainfall and high evaporation with an annual average rainfall in the range of 200 to 400 millimetres with almost 70% of the area receiving on average less than 300 millimetres per annum (DNR 2000). Approximately half of the Paroo Catchment is contained in Queensland, all of which is within the South West Natural Resource Management (NRM) Ltd region. The Catchment covers more than 76,000 square kilometres of inland Australia and is the most westerly in the Murray-Darling Basin.

The Paroo Catchment contains the entirety of Currawinya National Park (151,300 hectares) as well as a very small portion of Mariala National Park. Budjiti people are the traditional owners of the Currawinya Lakes area (near Hungerford). This area is significant to the Budjiti people for its religious, social, cultural and economic values (Australian Heritage Commission, 2000). The Park has a variety of vegetation types, landscapes, birds and animals, including the endangered Bilby. Bilbies, bred in captivity at Charleville, were released into a 25 square kilometre predator and feral animal proof enclosure in 2001. Currawinya National Park was selected as the reintroduction site because bilbies once occurred there, and it is roughly the centre of the bilbies former geographical range in eastern Australia.

There are six Wetlands within the Paroo Catchment listed on A Directory of Important Wetlands in Australia (3rd Edition) (Commonwealth of Australia 2001), as well as the Eulo Artesian Springs Supergroup which is a collection of more than forty springs scattered in the area south-west of Eulo (DNR 2000). Under the Management Arrangements of the Paroo River Wetlands, the New South Wales and Queensland Government have signed the Paroo River Agreement. Under this Agreement, both Governments have agreed to work cooperatively to maintain the natural water flows in the Paroo River system.

Mulga (Acacia aneura) is the predominant vegetation type in the Paroo Catchment. Mulga communities can range from open scrubland to tall, open shrublands. There are also dissected stony residuals within the Catchment that support a selection of Bastard Mulga, Lancewood, and Bendee (DNR 2000). The Channels of the Paroo River and its associated streams are fringed by a mixture of Eucalypt and Gidgee associations with the dominant Eucalypt species in the Catchment being River Red Gum, Coolibah, and Poplar Box (DNR 2000). In the lower reaches of the Catchment, the Paroo River loses its defined path and many types of Wetland vegetation can be found, including Blackbox, River Cooba, grasses, and forbs.

An array of significant fauna and flora species have been listed for the Warrego, Paroo and Nebine catchments under either Commonwealth or State legislation (DNR 2000). Of particular interest in the Paroo Catchment are:

Following is a Poem by Henry Lawson for inclusion on the signage:

It was a week from Christmas-time,
As near as I remember,
And half a year since, in the rear,
We'd left the Darling Timber.
The track was hot and more than drear;
The day dragged out forever;
But now we knew that we were near
Our Camp – the Paroo River.

With blighted eyes and blistered feet,
With stomachs out of order,
Half-mad with flies and dust and heat
We'd crossed the Queensland Border.
I longed to hear a stream go by
And see the circles quiver;
I longed to lay me down and die
That night on Paroo River.

The "nose-bags" heavy on each chest
(God bless one kindly squatter!).
With grateful weight our hearts they pressed -
We only wanted water.
The sun was getting in a spray
Of colour like a liver –
We'd fondly hoped to camp and stay
That night by Paroo River.

A cloud was on my mate's broad brow,
And once I heard him mutter:
"What price the good old Darling, now? –
God bless that grand old gutter!"
And then he stopped and slowly said
In tones that made me shiver:
"It cannot well be on ahead –
I think we've crossed the river."

But soon we saw a strip of ground
Beside the track we followed,
No damper than the surface round,
But just a little hollowed.
His brow assumed a thoughtful frown –
This speech he did deliver:
"I wonder if we'd best go down
Or up the blessed river?"