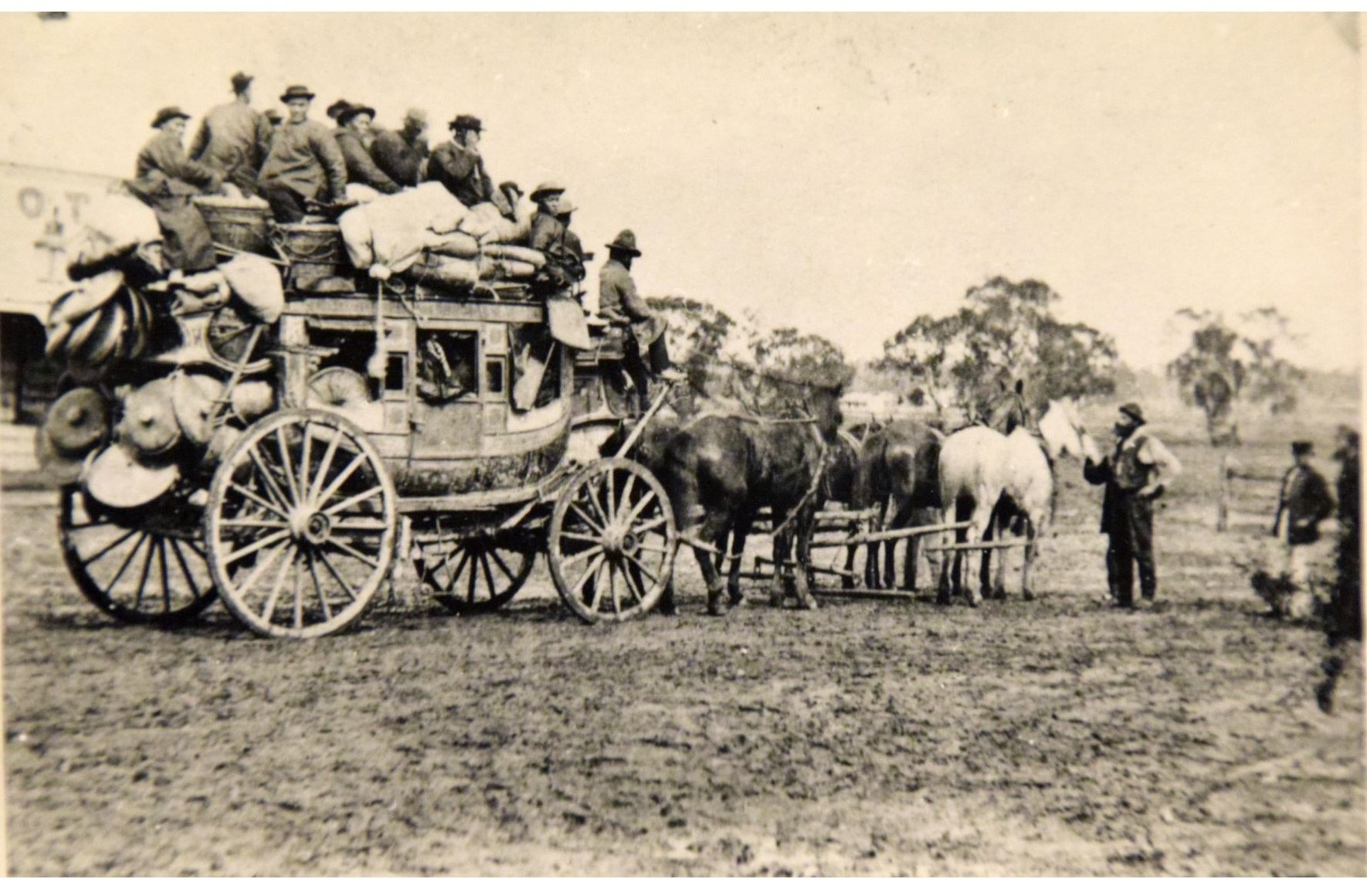 During the 1890's, Thargomindah became the home for Cobb & Co Coaches servicing the distant settlements of Hungerford, Wompah, Oontoo, Kyabra, and Toompine. The trip by Stage Coach to Cunnamulla, which was a distance of 150 miles, would take about 5–6 days, on a good (dry) road.

On the eastern entrance to Thargomindah, visitors can see the old stone Cobb & Co river crossing. This crossing was the main access to town, though as the river came up, this too became impassable. The stone crossing was used up until late 1929 when the current bridge was built.

If people feel that the road toll now is extreme, it was no bed of roses in the days of coach travel. Horses and men were spirited, and bolting and drunkenness were only two of the many hazards that had to be faced on the roads. Coach drivers and passengers had to contend with wild animals, unfriendly aborigines, deep water (shown below - at Eulo)

and rough, potholed tracks. The high speeds of the very lightweight Coaches meant that any one of a hundred mishaps could occur, including rollovers. (image below courtesy of Time Gents) 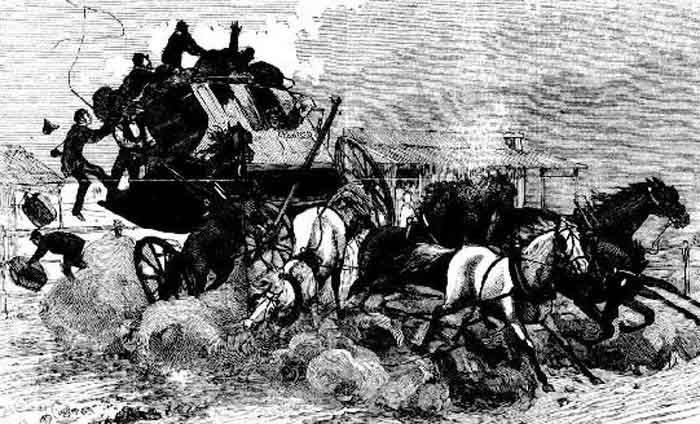 Brake failure was common on steep, winding roads, and on many occasions, the horses had to be urged along faster and faster to stay in front of the coach.

Sometimes the horses would shy at a goanna, a lizard, or some imaginary object causing all the horses to bolt. Even a broken rein could cause a bolt, and often the coach would roll over, with fatal consequences.

The worst feature of coach travel was the discomfort of travelling long hours in extreme cold or heat seated on top of the Coach. Even an inside seat was no guarantee of comfort. For the outside passengers, overhanging trees were a health hazard. In the late 1800's, a coach in transit from Cunnamulla to Thargomindah, with a full load inside and outside, was held for an additional paying passenger. Since all seating was taken, he sat among the luggage, and being of Chinese extraction he was not unduly discomforted. Somewhere between Cunnamulla and Suicide Creek, the coach negotiated a bend, where many River Red Gums overhung the road. Consequently, the Chinese man was swept off into the forked clutches of the tree.

This trip of 150 miles, on a good road, would take about 5 – 6 days. Thus, when the coach arrived in Thargomindah with a missing passenger 4 days later, there was a concern, and a search party of Police and Black-Trackers set out to look for the missing passenger, knowing that few people survived for long in the harsh environment. The Chinese man was found, still in the tree, frightened, scratched, and a little thirsty. He had kept his sanity by talking to the trees and the birds. The remainder of his trip was completed on the back of the Constable's horse, with the memory of an experience he would never forget. 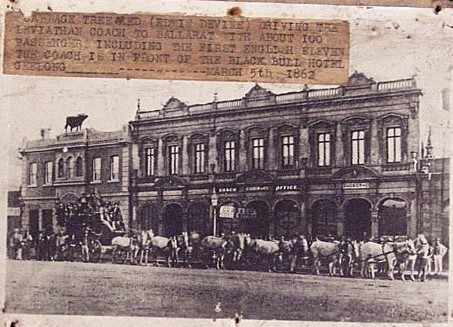 Overloading of coaches was a constant threat, and in 1859 a coach overturned on the Bendigo Road in Victoria with dire consequences. It was admitted later that overloading, with 20 people on the top of the coach, (image above courtesy of Ballarat Historical Society) could have contributed to the rollover. The coach drivers needed to have a flair for handling and driving a horse team of seven or more horses. They needed skill in handling the four running reins – two for the leaders and two for the wheelers and polers – from which check reins ran to every horse and were held in the left hand. During the seventy years of the coach era, there was a ratio of 5 grooms to every driver, and their job was to groom and prepare the horses and harness at each changing station – these were normally about 50 – 80 miles apart, depending on the terrain and number of rivers which had to be crossed.

One of the many famous drivers of the time was Ned Devine, known as "Cabbage Tree". (image below courtesy of fyansford.com) He was a master at handling large teams of horses, and was Cobb & Co's highest paid and respected driver. He could handle up to 22 horses in one team, and he drove the first all England Cricket Team to their matches in 1862, with a team of twelve greys.

To drive away the boredom on many coach trips, storytellers often plied their trade. One such storyteller was Mick Dougherty. As he was a renowned speaker, passengers paid up to an extra 2 pounds for a seat on the Box. There are many stories of adventure associated with the coaches, drivers and grooms that need to be collected and told however, we have sadly lost many an exciting adventure story and escapade.